Swinging to the future?

If the past is a foreign country, then the future is probably a party somewhere in the East Midlands. You look forward to it, talk excitedly about it and worry about what you’re going to wear. However, when you get there, via the M1 of time, it’s usually a bit rubbish, loads of cool people didn’t make it and the music is awful. And there’s no bloody jetpacks.

However, it is somewhere we must all visit, eventually and it would handy to know what to expect. So, step into my needlessly phallic-shaped time machine and let’s explore the FUTURE OF SWINGING!

Always a biggie, this subject. In an incredibly short space of time, swinging has evolved from writing to the owner of some B&W photos in a specialist magazine, waiting for a reply, trying the next advert, writing to the owners of some…. well, you get the drift, to an almost instant exchange of text-based naughtiness followed, hopefully, by a night of animalistic rutting. And prosecco. This is all down to the ‘white heat of technology’ and it is still advancing. Much has been made, in the forums lately, about ‘sex robots’ and the industry is indeed progressing at a great rate of knots – so much so that futureofsex.net predicts that by 2045, 10% of young adults will have had sex with a humanoid robot. What’s more the likelihood is that adult performers (and maybe some B-Z list celebs) will be selling robotic replicas of themselves. The tech certainly doesn’t end with horny hardware; artificial intelligence software will rise in sophistication and use deep learning to understand and seamlessly respond to human desire. You will be able to download these personalities into sex robots.

If the thought of having sex with a chatty bit of silicon doesn’t grab you, there is always the possibility of using Virtual Reality and haptic sex toys or, to give it its much better name teledildonics. Imagine being in bed, seeing and feeling your partner thrusting into you even though you’re at that bloody marketing conference in Scarborough, while they’re at the other end of the fibre optic, feeling your hips pushing against theirs. Combine this tech with 3D printing and you could have an exact replica of your partners genitals, feeling and responding exactly as they do. When it comes to swinging, you could even build up a collection of your favourite play partners’ bits and bobs for those lonely nights online. You might even like to give your favourite porn star a good time, just by donning a headset and using their personalised sex toys. There is even the possibilty of a virtual social, with all the members attending a custom-made swingers’ club. 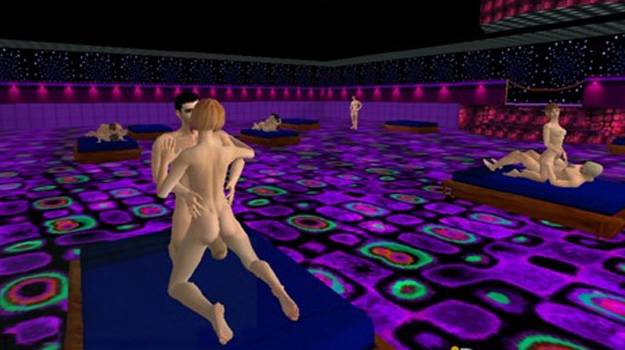 Body-modding, or augmentation, is also on the table, of course. The medical profession is performing genital reconstruction surgeries, penile and womb transplants, and even using regenerative medicine to grow sexual organs. People known as Grinders, are turning themselves into sexual cyborgs by manipulating biology – Biohacker Rich Lee has created prototypes of a vibrating penile implant called Lovetron9000. There are even neural headsets being developed that are predicted to be less than 10 years away from enabling partners to bring each other to orgasm through the power of the mind!

You just don’t get that in Coalville!

Of course, when it comes to swinging, it’s not just the physical – or even cyber – world we have to worry about. The scene is still on the down-low, a dirty secret that we keep from our loved one and colleagues. Gawd knows what would happen if they found out – shunned at family weddings, passed over for promotion, gossiped about in the staff canteen. Yet, a few years ago, nothing could have been more sleazy and unwholesome as pole dancing – now your local vicar’s wife is giving lessons to the kids! Worried about going to a sex shop? Fear no longer – they have ads on the telly for it now! Could swinging ever gain the same veneer of respectability? We know that attitudes towards sexuality are changing all the time. It really wasn’t that long ago that people thought homosexuality was ‘wrong’ and that sex before marriage was sinful. It can’t be long before consensual, extramarital sex is viewed in the same way. If you see an online newspaper carry a story about a swinging club or party, most of the comments tend towards the live-and-let-live variety (in between the inevitable juvenile jokes and the god-will-smite-ye merchants). Can it really be that far down the line before we see ‘Swingercise’ classes at the local leisure centre? Will we soon start seeing @Admin smiling out at us, during the ad-break of Corrie, urging us to “Get Social, get Swinging!”?

I’ve got my leg-warmers ready and my video recorder on stand-by, just in case.

From one swinging site to another.. my experience. Swinging Not Dating

From one swinging site to another.. my experience.